THE PAINTER AND THE WRITER- IN CONVERSATION

My son is a writer. I knew it virtually from the moment he was born -he couldn’t talk of course, let alone write, duh, but the way he interpreted the world with questions, challenges, curiosity and exploration made it evident that he was destined to re-interpret life in a creative way. Ironically he didn’t – or rather wouldn’t –write, (as in the neuromechanical sense of the word) until he was eight. But he hasn’t stopped since. (Sidenote -why does The System in this country give so much precedence to writing at such a young age? Oli at just over 4 years of age, like many many other children, had issues with his fine motor skills and some dyspraxia around his handgrip, as well as a disconnect between the speed his brain works and the speed at which he could move the pen across the page, {A problem which he acknowledges is still an issue for him.} This resulted in intense frustration and anger and, to cut a long story short, a four-year stint of home education to undo the damage that had been done.) 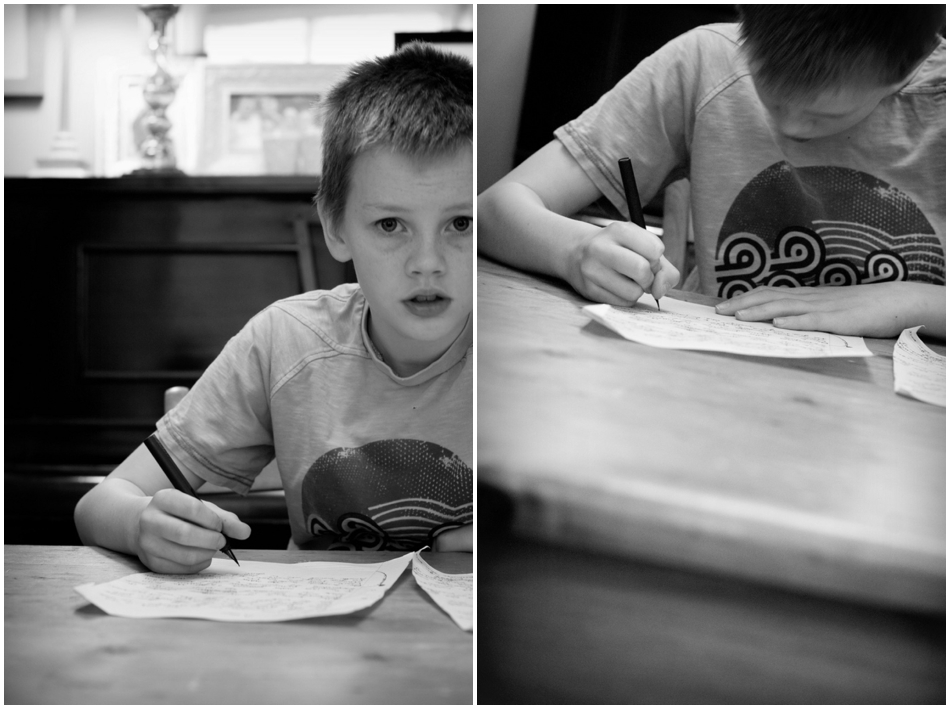 Oli hasn’t painted since his GCSE art days. I know that he will come back to it, but for now, his energies are going into theatre-based arts. He is a joint founder of a theatre company called UnThink which aims at making theatre accessible and cheap, creating a space to make art a social function.

Over the last few years he has spent many hours in the studio with me discussing arguing and challenging my work and my thinking he’s the best critic I’ve ever had; consistently brutal, takes no hostages- but when he pays me a compliment I know how much he means it.

Oli is currently studying creative writing with the Open University, as well as Arts and Humanities. This gives him an even more layered insight into painting as an art form in the context of the other arts, and we’ve had many conversations along these lines. He has recently written a blog post on the parallels between writing and painting and this has led to some interesting discussions between us, and we wanted to record some of our thoughts, maybe as part of an ongoing discussion between the two blogs.

We sat down to talk in the upstairs café at the Bristol Old Vic, a very conducive area to work in, recently renovated, quiet and spacious. It would be nice to think that the creativity that has been witnessed within those walls might permeate our own mortal abilities! We started off by talking about his blog post and I asked him how did he feel when he read it now. His first comment; ‘I realise I could’ve done it much better.’ (a typical Oli comment). ‘Haha’, I said, ‘a typical Oli comment. So how does that make you feel, knowing that it’s out in the world without being perfect?’ He conceded it was something he was learning to deal with, and that ironically his anxiety about perfectionism was now overtaken by his need (anxiety) to be productive. (Over the years I’ve tried to give him advice on overcoming perfectionism, dealing with creative blocks, fear of failure, fear of success and so on, as well as practical stuff such as time management and editing skills. But I think the most important thing I’ve managed to teach him is by example; these things can be overcome and the pay-off is huge. )

This issue of putting one’s work out into the world is an important one for any artist. Recently UnThink supported a poet/writer in getting her own work out to a wider audience, a piece that for whatever reason she had felt unable to post herself, but in the supportive arena of the UnThink open mic night had no fears at all. I’m sure the validation from a peer group was an important factor and I certainly identify with this too- it’s hard standing up and calling yourself an artist. I can remember (not that long ago) when I first started to do it and felt like a fraud. Being an artist in any form necessitates a lot of self-motivation and awareness of one’s own goals as well as talent. We need to know why we do it. 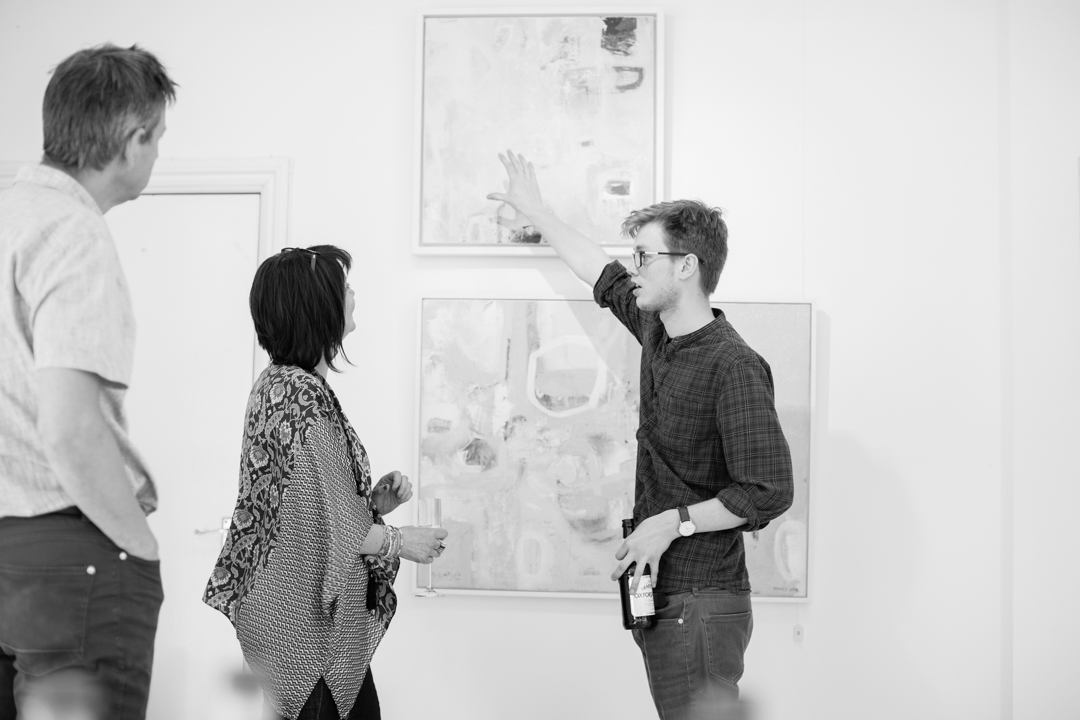 Oli commented that more people write poetry for themselves and there’s less of a need (or a possibility) of making money or a name for oneself. Or perhaps they are looking to make a career out of it but it is always ‘tomorrow’. He recently met with a mover and shaker in the Bristol art scene who commented that it was refreshing to see a group of young people ‘getting off their asses and doing something’; he felt there were a lot of young people talking about making art, but not actually doing it. I bristled at this suggestion, feeling it as an outright criticism, but Oli saw a different side, claiming that he knows many artists who aren’t creating- or if they are creating their work doesn’t go anywhere. Was this because they feel unsupported or lacking in confidence, I wondered? He feels it runs deeper-it’s more of an existential issue he says; his generation feels almost nihilistic. There is almost a certainty that things aren’t going to work out – politically, socially and environmentally- and sometimes it’s hard to wonder what’s the point in it all. But surely, I wonder, isn’t that the point? That when all else has fallen apart we still have art? And on this we agree- Oli makes art for himself, because of an innate need- we both do- and we both have limited expectations that it will change the world in any dramatic way. I think there is plenty of evidence to suggest that there is a sense of urgency amongst the youth- look at Greta Thunberg, to use an obvious example. Urgency is what drives my art -I’m way over halfway through my life- I don’t feel in any way passive about my art-making, I feel a deep sense that time is running out. Deadlines are motivating at any level, aren’t they?!

We pulled ourselves back on topic and discussed one of the key differences between a writer and a painter. A writer is working with a finite set of limited characters (by characters we mean the letters that make up language rather than the characters who are involved in the story.) The writer’s lexicon is an ultimately finite list of words that are occasionally added to when new words are introduced into the language or new ways in which these words can be used in combination with others. But despite ever-growing and changing it is still, to all intents and purposes, finite. On the other hand, painters have a virtually unlimited set of mark-making tools and materials and consequently an arguably infinite number of painterly possibilities. There is no dictionary of brush strokes. This doesn’t necessarily make the painter’s job easier, for as every artist knows, limitations and boundaries can assist in the creation of art and infinite possibility can be overwhelming and lead to the artist flailing around for somewhere to start. 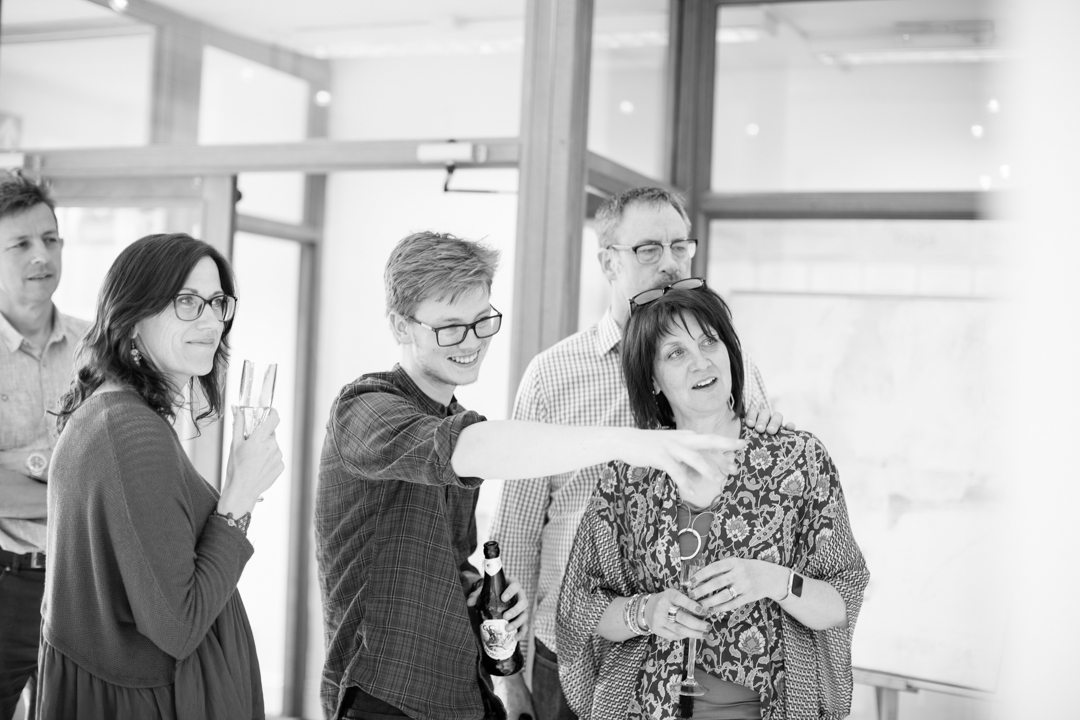 Additionally, Oli is writing in English- and everyone reading his work will be able to speak that language. He argues that not everyone who sees work such as mine ‘speaks abstract art.’ Does this mean the bar is higher for writers, as everyone is closer to being an expert in the form, by dint of the fact that they share a common language, or is the opposite true? Do painters have to wrestle with an audience that has no clue what you are trying to say? (Some of my encounters with art viewers would back that up?)

Is it harder as a writer, to find your consistent authentic voice, given the variety of marks and materials we have at our disposal? We both agree -yes. It is as important to have a consistent voice as a writer as an artist. Oli feels it depends on what writing you do-certain forms of writing demand particular styles; journalism, copywriting, fiction, poetry, or scripts. Many writers have succeeded in a wide range of writing styles, whereas I feel as an artist a certain pressure to have a look and a consistency which is seen to reflect a certain maturity and encourages confidence in galleries and clients. A visual artist feels like they must continuously be growing upwards and onwards and this is true for writers too- but they also have to learn how to jump sideways at a moments notice. Oli commented that a writer’s skill is often in being able to adapt to a specific requirement or circumstance – to fit a brief- and it’s a slightly different matter for a painter like me, who is able to evolve and grow in response to an inner evolution rather than the demands of a fee-paying client. A luxury, really.

We devolved into a discussion of how the news is written these days, and the language of ‘newspeak.’ “Since when did the news become a multiple-choice” Oli remarked. We talked about cognitive bias and the fact we only read stuff that we agree with, and that consequently, opinions become polarised and more extreme. He said he had he received some critical looks in the café recently when he picked up a copy of the Sun. When I looked horrified, he reminded me that it’s important to see the other side, “and besides there’s always a sentence or two in it that I can take.”

That’s typical Oli too- collecting words and phrases, snippets of conversation, in much the same way as I will collect visual nuggets; like snapping the texture of a rusty garage door on my iPhone, tree bark or leaves in a puddle. We are both collectors of choice wordy and visual morsels- and that’s one thing that will forever bind painters and writers, dissecting what we are seeing in front of us and mining it for any creative potential.

The final area I was interested in covering was – how do you work out what you want to say and pick a subject? When writing, can you start with one sentence and let it unravel in a completely intuitive way, one word following another? This isn’t quite the way in which I approach my paintings, as increasingly these days I impose some structure at an early stage, but I do get to the point where one stroke follows another and I am able to let an unthinking, intuitive, expressive state takeover. I imagine this must be harder for a writer to achieve whilst still ensuring that his work has some meaning to the reader. We discussed the ‘rules’ in art; painting has rules around form, line, colour and so on, and of course, so does language; the rules of grammar and spelling- rules that are important because without which any meaning is prone to misinterpretation.

We mused over whether painters are freer from these rules and able to break them at will. I suspect so- we are even encouraged to do so.

The last question, before we were thrown out of the cafe at closing time. Are there things that you can only express through language, rather than in paint, or vice versa? Oli talked about my encaustic wax installation The Lost Words Project. This was a way of processing a lot of stuff for me around my mother’s dementia. Oli called it a ‘cruel nostalgia’- things I couldn’t talk about -not because it was painful which it undoubtedly is, but because the words literally wouldn’t come. There are also things I’ve written which I could never have painted. Take this post, for instance, it would be quite hard to replicate with a paintbrush… 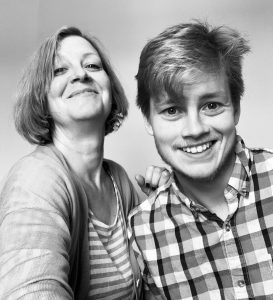